Construction of the final scheme

Work on the scheme is already underway with more work taking place between July and September 2020. More information on the construction taking place and a timeline for these can be found in the leaflet named ‘Coppermill Update Leaflet July 2020’ in the useful documents column.

From Monday 28 September as part of the Coppermill Area Scheme and Quietway 2 (Cycleway 27) scheme, we’re introducing a bus gate (modal filter) on South Access Road. This means, if you’re travelling by motorised vehicle to Low Hall Depot or to South Access recycling centre from Monday 28 September, you will need to travel along Argall Avenue from Lea Bridge Road. The entrance from South Access Road will only be available to access by people walking or cycling.

To keep up to date with events please keep visiting this page or sign up to the Coppermill blog, where you can receive updates directly via email.

In 2018 Waltham Forest Council successfully secured funding from Transport for London (TfL) as part of its Liveable Neighbourhoods programme, to enhance the Coppermill area and make it easier and safer for people to choose sustainable travel such as walking, cycling and public transport.

Unfortunately, due to the Covid-19 pandemic we have seen a substantial reduction, and in many cases complete withdrawal, of funding for transport and highway improvements. This includes funding that we were expecting from TfL to deliver schemes like the Coppermill Area scheme. Due to this, we are unfortunately unable to progress some of the schemes we were originally planning to, and have had to prioritise which measures and proposals to take forward based on their expected benefit and amount of funding now available.

Funding for this scheme will now be supported via the TfL “London Streetspace Plan” (LSP), which is aimed at providing emergency funding for implementing lower cost, high impact highways infrastructure schemes that will address various issues related to the Covid-19 pandemic. The LSP schemes aim to encourage and enable social distancing and ease potential pressure on London’s streets and transport system by encouraging the use of sustainable and active modes of travel. Further detailed information can be viewed here.

Unfortunately, the funding being provided through the London Streetspace Programme for the Coppermill Area scheme is significantly less than we were expecting as part of the original Liveable Neighbourhood Scheme. Therefore, certain proposals such as some of the Coppermill Lane corridor improvements, some of the public realm improvements, some of the highways and pedestrian improvements, and the traffic calming improvements will not be delivered at present. However, subject to future funding availability we may be able to review this, and we will update residents with further information via the scheme website.

At the same time as receiving funding for the Coppermill Area Scheme, the Council also secured funding to redirect the existing Quietway 2 (soon to be renamed Cycleway 27 by TfL) cycle route with the aim of encouraging residents, businesses and visitors to use sustainable modes of transport more often, so that together we can reduce congestion, tackle air pollution and improve the health and wellbeing of local people.

The new Quietway 2 (Cycleway 27) route alignment uses South Access Road, the Argall Business Estate and Lea Bridge Road to link St James Street with the London Borough of Hackney, instead of the current route alignment along Coppermill Lane and through the Lower Lea Valley. This change is being made due to accessibility and personal safety concerns within the Lower Lea Valley.

Funding has been secured from TfL’s LSP to complete the final phase of works to re-route Quietway 2 (rebranded as Cycleway 27) through the Coppermill area between St James Street and the borough boundary with Hackney. Over the past 2 years the Council has been developing and engaging on the proposed realignment and associated infrastructure improvements as part of the wider Coppermill Area Liveable Neighbourhood project, and the first phase of works in the Argall Industrial estate commenced in autumn 2019. This funding will enable all of the outstanding improvements along the new route to be introduced. An update leaflet explaining the remaining works was recently sent to all affected residents and businesses in the area.

Funding has been secured from TfL’s LSP to support delivery of the approved Coppermill Liveable Neighbourhood Scheme. As the amount of funding being provided by TfL as part of the LSP is significantly less than the Council was originally expecting from TfL for the original Liveable Neighbourhood Scheme, we have had to prioritise which measures we take forward initially and have also had to look at lower cost design and materials approaches. An update leaflet was sent to affected residents and businesses within the area in early July 2020 and works are scheduled to take place throughout August and September.

Engagement and public consultation so far

If you have any questions relating to the Enjoy Waltham Forest programme, do get in touch.

You can also sign up for newsletters about the Enjoy Waltham Forest programme here. 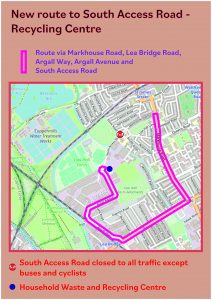